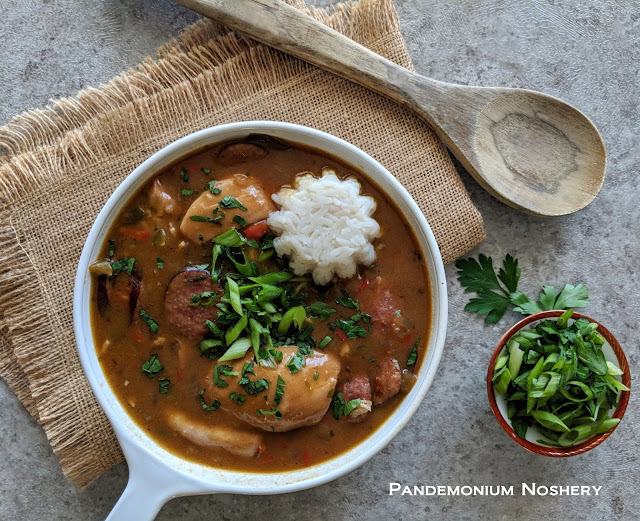 This recipe, and thus post makes me giddy, I haven't been this excited about a food project in a long time. Gumbo is not something I have every had before and something I have on the long list of things I do want to try for a very long time. I really wanted to try it somewhere before making it myself. Preferably New Orleans, or N'awlins. But since today is Mardi Gras I finally got around to making it, and it turned out very delicious, it kind of made my day. I made it the night before because I kept seeing over and over again how it is better the next day when the flavors have time to "marry" and as an added bonus come dinner time all I had to do is make rice and heat.  had a hard time not going in there and eating it the night before, in fact I  might have stolen at least a small bowl.

I did a lot of reading on gumbo before making this. There is a lot out there on the history, cooking methods, ingredients (and what NOT to use). There were a lot of variation but it all boiled down to a basic pattern.

Start with sausage, then a roux until it's dark, the holy trinity, and broth. Simmer for an hour and serve with rice. From there, there are lots of variations.  Tomatoes seem to be a hot subject. I like tomatoes in lots of other dishes but in this one I decided to try it without. Tomatoes tend to take over and I wanted to let some other flavors shine through. On the history of this it's about as varied as options for making gumbo. It appears to be an mix of cultures that mingled and created this. The local Indians, the French, and the African population with a dash of Spanish and Island cultures mixed in.

I originally made this with one package of sausage but after cooking it for an hour I felt like it lacked some flavor so I chopped up a second package and threw it in at the end. The chicken thighs simmered in the gumbo were absolutely amazing.

Rice to serve with

Add the oil and the flour to the pan and heat, over low heat, until its a dark chocolate color. This step takes a while but be patient. You don't want to rush it or it will burn. Be patient. stir it often, and just let it do it's thing. Make sure you have your "holy trinity" ready to go when you start it so it's ready to throw in.

Once it's chocolate colored throw in the peppers, onions, and celery. Cook them for about 5 minutes, stirring, and add the garlic.

Add half of the stock and stir, whisking to make it smooth. Add the remainder of the stock along with the bay leaves, okra, Tabasco, creole seasoning, sausage and chicken thighs. Simmer on low for 1 hour. Remove the thighs and bay leaves. Shred the chicken and throw back in the pot with the  file powder. Simmer for 20 minutes and remove from the heat. Let cool to room temperature and chill overnight. Gently reheat when ready to eat and serve with rice. 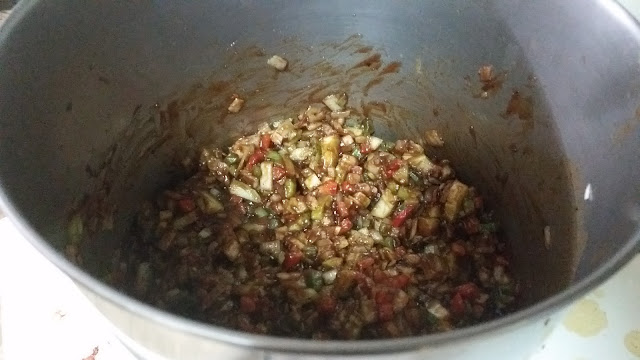 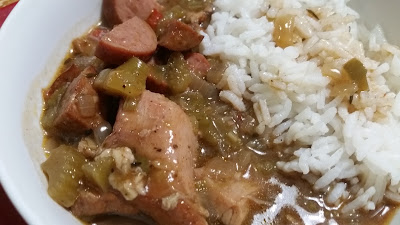