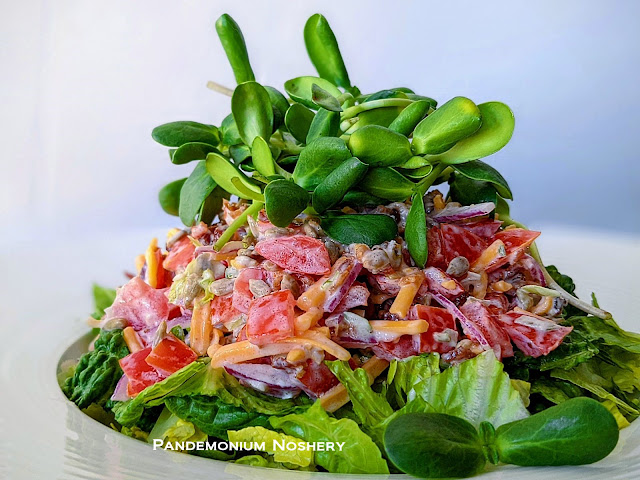 Welcome to another edition of Sunday Funday! This week's theme is Sprouts. Which is awesome, because I love them. I was introduced to sunflower sprouts when I lived outside the US. I didn't speak the local language so I had no idea what I was buying while at the store but I really wanted to try them out so I took them home. I translated the wrapper so I did know what they were before I ate them but I really could have just tasted them. One bite and they are easily recognizable; it was interesting to have what tasted like sunflower seeds in leaf form. The nutty leaves are absolutely delicious in a salad.

Tomatoes are a huge part of this dish. It's a great way to use up any, end every, type you have on hand. Because it's not a cooked dish you aren't trying to make sure textures and sizes match up. I have made this so many times over the years. Sometimes it's with Roma, sometimes cherub cuties, and sometimes, it's a mix of a small tomato, a few leftover small tomatoes, maybe some slices chopped from dinner the night before. It all works.

The dressing and the other components are a version of classic broccoli salad with a tangy mayo dressing, cheese, and onions. In my broccoli salad I usually use red onions, but sometimes green if that is what I have on hand. I really like onions, so I use both. If you aren't a fan of onions leave out the red onions. Keep the green onions though if you can, they are mild.

Can you use real bacon? Yes and no. It would be a really tasty addition to the salad. However, there is always a however. I was living in a country where bacon isn't a thing, it's nowhere to be found. So I would order the bags of real bacon bits to add some flavor when I needed it. I found that using real bacon bits and crisping them in the pan was even better than real bacon because the bacon bits don't get all soggy but still add a lot of great flavor. If you do want to add real bacon bits, sprinkle them on top of the salad just before serving. Don't skip the crisping stage if using the bits or they will just be chewy.

Check out these other great Sunday Funday recipes with sprouts.

Tomato and Sunflower Sprout Salad Recipe
24 oz. tomatoes, any type or a mix
1/2 c. mayonnaise
1-2 Tbsp. apple cider vinegar
1 tsp. sugar
1/4 tsp. salt
Dash black pepper
1 small red onion, sliced
4 green onions, sliced
1/2 c. cheddar cheese, grated
2 Tbsp. sunflower seeds
1/2 c. real bacon bits
2 romaine hearts, chopped
Sunflower sprouts
Place the bacon bits in a dry pan and cook, stirring occasionally, until crisp. Immediately remove from the pan and place on a paper towel. Set aside to cool.
Combine the mayo, salt, sugar, and pepper. Add in the vinegar and whisk until smooth. Taste and adjust the vinegar or sugar as needed.
Chop the tomatoes, if using cherry or other small tomatoes, cut them in half.
Combine the mayo, tomatoes, both types of onions, cheddar cheese, cooled bacon, and sunflower seeds.
Place a quarter of the chopped romaine on a plate. Top with a fourth of the tomato salad, and a quarter of the sprouts. Serve immediately.
Labels: Gluten Free Just Me United States