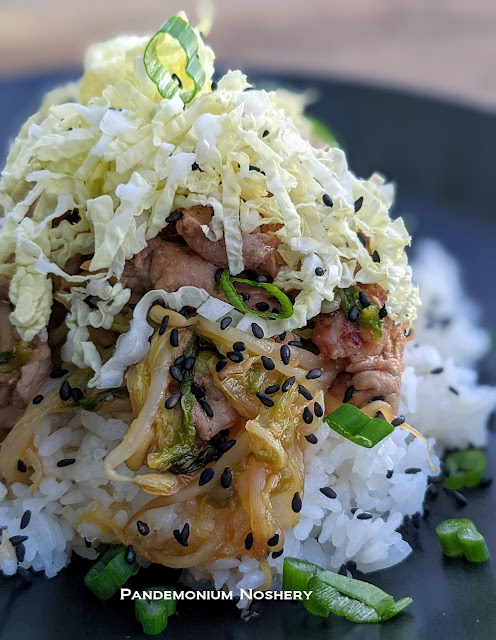 Hey! It's the first installment of Eat the World for 2022. This month we are traveling via the dinner table to Japan. When I saw the theme for this month I was so excited, I had just bought Kid 1 a Japanese cookbook for Christmas, and was so excited to dive in. It actually wasn't for me, but I might have read it while it was waiting to go under the tree. It's full of delicious recipes that are simple to prepare and amazing for dinner.
So like with all things, I adapt as I cook. this recipe was no exception. So a couple changes I made to the recipe were to work with things I had around. The first one was pork loin in place of the pork belly. Either is great here. Just make sure the pork is sliced very thin. The second change was instead of the hispi (or pointed) cabbage I used napa cabbage because I had it on hand. However, napa cabbage cooks faster than pointed or traditional cabbage so I add it later in the cooking. I also thought it would be fun to use siracha cabbage in place of regular so I sued that. Either works.
I also want to talk about the dressing here a little bit. It is amazing. Ok, that out of the way, it really is quite tasty. It uses half a tube of ginger paste but it's totally worth it. It's actually great on its own and would make a delicious ginger-soy salad dressing.
One thing that has held me back from trying more Japanese recipes is that I generally don't cook with alcohol and I am allergic to seafood and seaweed. So that has made it difficult but JapanEasy has so many options to try that I can make, or sub easily, that we can expect a lot of Japanese posts this year. I have made a few things before. I think out of all the things I have tried, the allergy-friendly sushi was my absolute favorite. 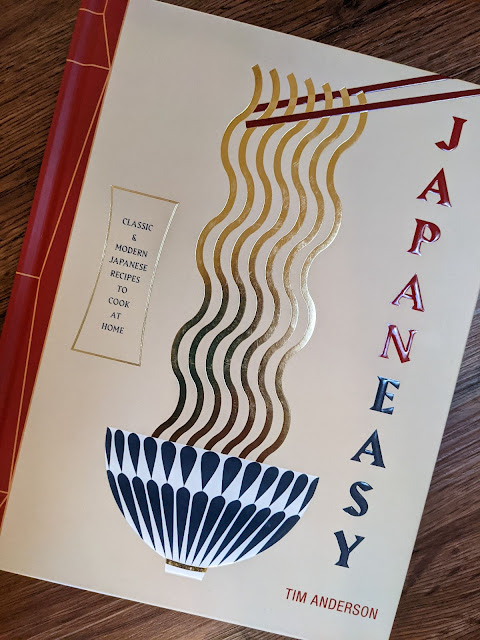 Check out all the wonderful Japanese dishes prepared by fellow Eat the World members and share with #eattheworld. Click here to find out how to join and have fun exploring a country a month in the kitchen with us!

Ginger Pork Recipe
2 lb. pork loin
2 oz. ginger paste
6 Tbsp. Soy Sauce
6 Tbsp. Mirin
1 Tbsp. Ketchup
1 tsp. sesame oil
2 Tbsp. oil (vegetable or bacon drippings)
1/2 napa cabbage, sliced
5 oz. bean sprouts
Cooked Rice
Thinly sliced cabbage
Sliced green onions
Sesame seeds
Combine the ginger paste, soy sauce, mirin, ketchup, and sesame oil in an air-tight container.
Thinly slice the pork and place in a large zipper seal bag with 3 tablespoons of the ginger mix. Place in the fridge for at least 30 minutes, up to overnight.
Heat the oil in a large pan or wok. Add the pork all at once and leave, without moving, to sear. once it starts to have some browned bits stir some to continue cooking. Once the meat is 90% cooked through add the cabbage, bean sprouts, and ginger sauce. Cook, stirring, until the meat is cooked through and the vegetables are crisp-tender.
Remove from the heat and serve with rice.
*************************************
Check out previous Eat the World contributions from Asia
Vietnam - Banh Trang Nuong
Laos - Kua Mee
Cambodia - Khmer Lok Lak
India - Gulab Jamun
Bangladesh - Zafrani Pulao
Labels: Group Blogging Challenge Japan