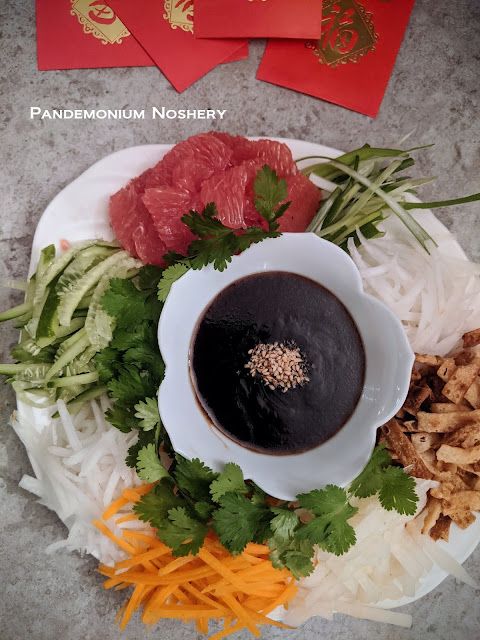 This toss salad is eaten in China and Malaysia as part of a traditional Lunar New Year celebration. It's also traditionally eaten with shashimi, which I am allergic to so I left it out. It is served with all of the individual components of the salad in artful groups. Once everyone has had a change to see the beautiful salad drizzle it with the dressing and toss to combine before eating.

The wonton strips, some recipes called for fresh fried wonton wrappers but to save time I use packaged wontons strips. And really it should have saved me time but I couldn't find them in store anywhere. I checked the Asian section at wal-mart for them and was annoyed to see they were out. So, I tried the larger, slightly nicer market across town and their Asian section didn't have them either. Slightly disappointed I went to Target, and then the grocery store with the large international section. Two hours in I was stubbornly refusing to give up when I remember that the Asian salad kits at Sam's club have them in it. I could use that packet and then link to Amazon. I needed them the next day but I thought I could save you some trouble. When I realized....they were in the Sam's Club salad kit. I had been checking the Asian sections. So I went back to the very first store I went to and they had them on the shelf, in the salad section. So now you know, look near the dressings.

Julienne the daikon, carrot, pear, and cucumber. Cover and set aside.

Segment the pomelo or grapefruit to remove all the pith. Set aside.

Place the wonton strips in a dry pan and heat, stirring often, over medium heat until browned.

Arrange the wonton strips and all the fruits and vegetables on a platter keeping the individual varieties together to showcase them. Place the dressing in a small dish in the center.

Serve with the salad separate on the platter. Once everyone is ready to eat, and has seen how it was artfully arranged, drizzle with the dressing and toss to combine. Sprinkle with the sesame seeds and enjoy!
Labels: China Malaysia Vegan Vegetarian