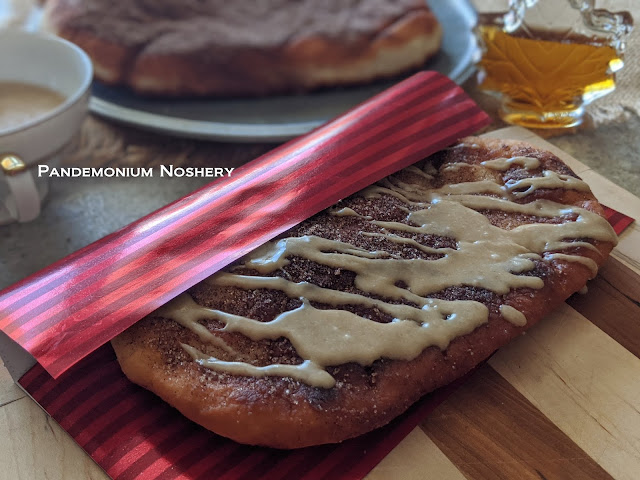 Beaver Tails are as Canadian as poutine and Nanaimo Bars and just as delicious. These fried, elongated doughnuts were first marketed by Grant Hooker in 1978. Based of a treat his grandmother used to make him he started selling them at the fair and then two years later opened his first permanent stand before eventually going on to have over 140 locations around the world. But most of us don't live close to one of those locations and have to make them ourselves.

Popular toppings are cinnamon and sugar, or chocolate, peanut butter, and reeses pieces. Nutella and bananas are also a common choice. For mine though, I went with a maple glaze to celebrate National Maple Syrup Day later this month with #FoodieExtravaganza! Check out the links at the bottom of this post, there are some amazing looking recipes with maple.

In a bowl combine the warm water, warm milk, and sugar. Swirl to combine and sprinkle the top with the yeast. Allow to proof for 5 minutes.

Add the oil, flour, and salt at stir just to combine. Remove the dough from the bowl on to a clean surface and knead until smooth.

Wash, dry, and lightly oil the bowl. Place the dough back in the bowl and cover with lightly greased plastic wrap. Allow to rise until doubled in size, about 1 hour.

Remove from the bowl on to a lightly floured surface and section in to 6 pieces. Roll each piece in to a uniformly thin oval and lightly score the top of the dough with a sharp knife in to a cross hatch design.

Cover again with lightly greased plastic wrap and allow to rest and rise for 30 more minutes.

Meanwhile, pour enough oil in to a frying pan so it measures about an inch deep. Heat over medium for about 10 minutes.

Combine the cinnamon and sugar

Add the dough, one at a time to the hot oil and fry on both sides until golden brown. Remove from the oil to a wire rack and immediately sprinkle on both sides with the cinnamon sugar.

Continue frying until all six are cooked.

Top with the maple glaze or toppings of choice.

Combine the brown sugar, milk, and butter and bring to a boil. Boil for 2 minutes and remove from the heat. Pour in to a heat proof bowl and quickly whisk in the powdered sugar until smooth. Add the maple syrup and whisk again to combine.