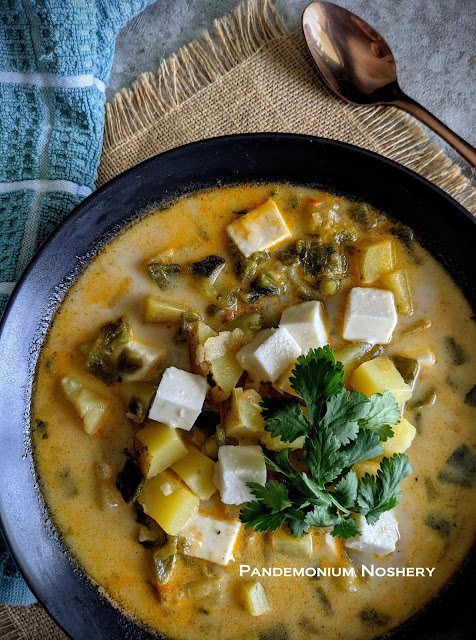 I've had cheese soup before, but never with cubes of cheese in the soup instead of melted in to the broth. And I have to say that I am a huge pan. I loved the chewy cheese in the soup with the soft potatoes and delicious roast peppers. This traditional Mexican recipe hails from the northern area of Mexico via Muy Delish.

4 Anaheim peppers
2 Tbsp. oil
1 onion, chopped
4 cloves garlic, minced
3 roma tomatoes, chopped fine
4 c. yukon gold potatoes, diced
1/2 tsp. salt
1/2 tsp. black pepper
4 c. chicken broth
1 bunch cilantro, tied together
1 1/2 c. milk
10 oz. Queso Fresco
Place the peppers directly on the stove and cook until charred on all sides. Place in a large zipper seal plastic bag and leave for 10 minutes, or until cool enough to handle. Remove from the bag, scrape the skin off the pepper and split open. Scrape out the seeds and chop the peppers. Set aside.
Heat the oil in a large soup pan. Add the onion and sauté for 5 minutes or until translucent. Add the garlic and cook for 30 seconds or until fragrant. Add the tomatoes and cook until broken down, stirring often, about 10 minutes. Add the potatoes, salt, and pepper. Cook, stirring, until the potatoes are starting to cook and the tomatoes coat the potatoes.
Add the broth and cilantro bundle. Simmer for 15 minutes or until the potatoes are cooked through. Remove the cilantro bundle and add the chopped chilis and warm milk. Taste for seasoning and add more salt or pepper as needed.
Cube the cheese and gently stir in to the soup. Serve immediately.
Labels: Central/ South American Gluten Free Mexico Soup/Stew