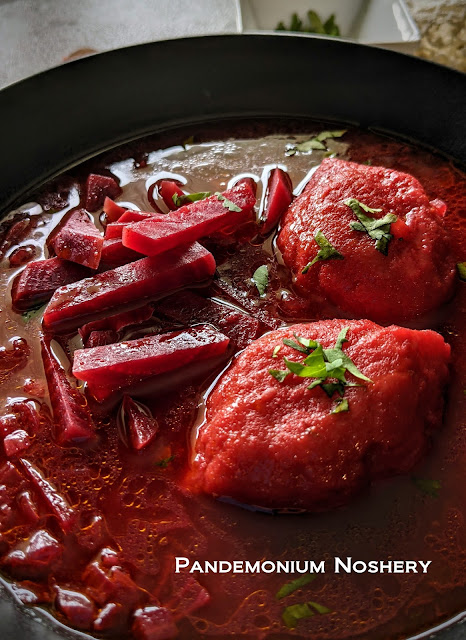 It's Sunday Funday time! And this week we are focusing on beets! I dunno about you but I love beets. I esp. love the vibrant color they impart to everything. When I think of beets the first thing that comes to mind is Ukrainian borscht. It's such a hearty and warming soup. But borscht isn't the only delicious soup that incorporates these vibrant little gems. In Israel a Jewish Iraqi dish is quite popular, and for good reason. It's delicious, and warming, with dumplings filled with spiced meat. The meat cooks inside the dumplings making these simple to put together.
A few tips with this recipe. First the semolina dumplings, mix the dough up before you start anything else to give the semolina time to sit for a few minutes and hydrate. The dough should be moldable, they should be easy to shape and then seal without being sticky. A little bit might stick to your hands, but it should mostly go together really well. Once you pull off your bit of dough to make a dumpling you want to roll it really tightly and then press it fairly thin. If the dough is too thick then the dumpling will be tough.
Check out what everyone else is making this week with beets.

Recipe
1/4 lb. ground beef
1 onion, chopped fine
1/2 tsp. hot paprika
1/8 tsp. cumin
1/8 tsp. allspice
1/8 tsp. black pepper
1/4 tsp. salt
1 c. semolina flour
1/2 tsp. salt
1/2 c. warm water
1 Tbsp. olive oil
1/8 tsp. cinnamon
1/2 tsp. hot paprika
pinch cumin
1 Tbsp. tomato paste
1/4 c. apple cider vinegar
2 beets, peeled and cut in to batonnet
2 tsp. sugar
6 c. beef broth
1-2 lemons
Fresh chopped cilantro
Combine the semolina, salt, and warm water. Add more water as needed to to make a smooth dough. The consistency should be like playdough, moldable, holds it's shape, but not sticky. Set aside for 5 minutes.
Combine the meat, all of it's spices, and a quarter of the chopped onion. Mix until well combined.
Heat the olive oil in a large soup pot. Add the remaining onion and cook until translucent. Add the cinnamon, hot paprika, cumin, and tomato paste. Cook, stirring, for 2-3 minutes. Turn the heat to high and add the vinegar. Cook until the vinegar is mostly evaporated. Add the beets, broth, and sugar. Bring to a simmer and simmer for at least 5 minutes before adding the dumplings.
Scoop the dough in to pieces about half the size of a golf ball. Roll in to a ball and then squish flat. Fill with two teaspoons of the raw hamburger. Squish the semolina dough around the meat to seal the dumpling. Roll to smooth out and pinch at the end to elongate.
Once all the dumplings are filled make sure the soup is hot and simmering but not a rolling boil. Gently add the dumplings to the soup. Cover and simmer for 20 minutes. Remove from the heat, add the lemon juice, and set aside. Let stand for 10 minutes.
Serve with cilantro on top.
Labels: Group Blogging Challenge Iraq Israel/ Jewish Middle Eastern Soup/Stew