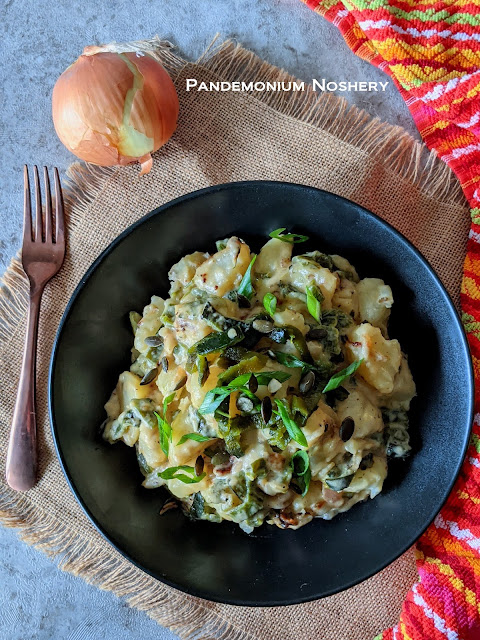 In Spanish raja means strips as a direct translation but typically refers to roasted poblano strips used in Mexican cooking. Raja strips are used with all kinds of things, usually bound with a bit of cream to really bring it all together. Onions are a must, other popular combinations are corn and potatoes. You can serve them in a tortilla or like I did as a stew.

I bought a bag of 5 poblano peppers a few weeks ago with the intention of making chili rellenos. That didn't happen and I needed something to do with them so they didn't go to waste. This recipe was a delicious way to use up the peppers, esp. since they only needed a few other pantry staples to make that happen.
4 large potatoes, peeled and cubed
5 poblano peppers
1 large onion, sliced
4 tbsp. butter
Salt an Pepper, to taste
3/4 c. heavy cream
1/2 c. milk
Heat the butter in a cast iron skillet. Add the potatoes and the onions and cover with a lid. Stir every few minutes and replace the lid. Cook until the potatoes are browned on the outside and cooked, but el dente, on the inside. If your potatoes don't look like they will cook this way you can add some water to the bottom of the pan to steam them. Season with salt and pepper to taste.
Reduce the heat to low and add the heavy cream and milk. Stir to combine.
Meanwhile broil the poblano peppers on both sides until the skin is blackened and charred. Place them in a large zipper sealed bag or wrap in aluminum foil and allow to steam for 5 minutes.
Remove the peppers from the bag and scrape the skin off the outside. Slice in to strips. Add the peppers to the cream and potatoes and stir, very gently, to mix throughout. Taste for salt and pepper and adjust as needed.
Serve immediately.
Labels: Central/ South American Gluten Free Mexico Vegetarian