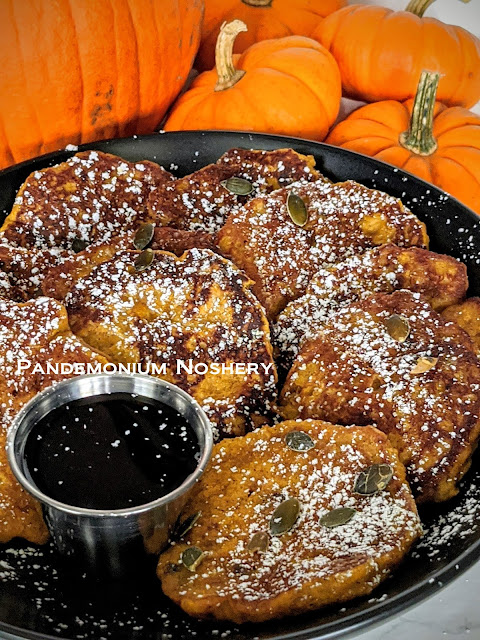 Looking for something delicious to make that has fall written all over it? This delightful recipe from Curacao is a great way to incorporate pumpkin, or use up some that you already have around. I used the scraps from my kids carving pumpkins. Just peel the skin off and cube up. then you are well on your way to a delicious Caribbean treat. These pumpkin arepas are a bit less like what I know of as a pancake and more like a custard inside.
2 cups pumpkin cubes
2 Tbsp. oil, plus more for cooking
1/2 tsp. cinnamon
1/4 tsp. nutmeg
1/4 c. milk
1 egg
2 Tbsp. brown sugar
1/2 tsp. vanilla extract
1/2 c. flour
1/2 tsp. baking soda
2 - 3 Tbsp. golden raisins, chopped
Powdered sugar, syrup, pepitas, walnuts
Heat the oil in a skillet. Chop the pumpkin cubes to half inch size and cook in the pan. Stir occasionally but cover with the lid in between to help steam it some. One the pumpkin is about halfway cooked add the cinnamon to the pan. Continue cooking, and stirring, until the pumpkin is completely cooked.
Remove from the pan and crush with a fork or potato masher. Add the nutmeg, sugar, milk, egg, raisins, and vanilla to the pan. Mix to combine. Dump the flour on top and the baking soda on top of the flour. Mix a little to mix the flour and soda. Stir the flour mixture in to the pumpkin mixture. Stir until well combined.
Heat some additional oil in a skillet. Add a heaping spoonful of the batter to the heated skillet. Pat or smooth it flat and allow it to cook. Leave it until it's starting to look dry and flip. Cook on the other side. Remove from the pan.
Top with powdered sugar and toasted nuts.
Labels: Caribbean Central/ South American Curacao Netherlands Vegetarian