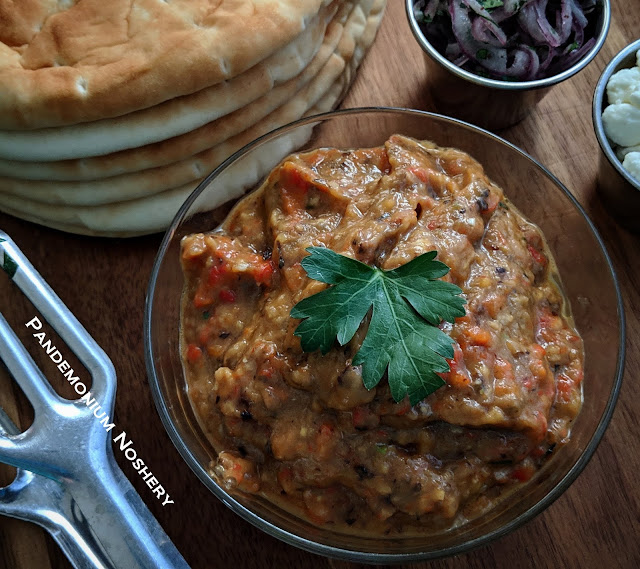 Ajvar is delicious lots of ways. On toast and in pasta are delicious but here we are eating it with cevapi on pitas. The roasted peppers are naturally sweet and perfectly balanced by the tang of the vinegar. It's should be redder than mine, I ended up with only one red pepper when there should be a higher percentage so my recipe reflects that. Hopefully yours is a redder color.  Either way it's delicious.

Cut the eggplant in quarters lengthwise and brush the sides with oil. Rub the outside of the bell peppers with oil too and place the peppers and eggplants on a baking tray. Place in the oven and bake for 30 minutes until the eggplant is cooked through. About halfway through cooking turn the peppers to blacken on both sides.

Remove from the oven and place the bell peppers in a large zipper sealed plastic bag to steal. Seal and leave for about 5 minutes. Meanwhile scrape the eggplant from the purple skin and place in a bowl.

When the peppers are softened remove them from the bag, cut in half, and peel the skin off.

Place the oil, vinegar, salt, and garlic in a food processor. And run to chop the garlic. Add both the red peppers and process to chop up. Keep running until they are in small pieces but not pureed. Add the eggplant and run again until it is incorporated.