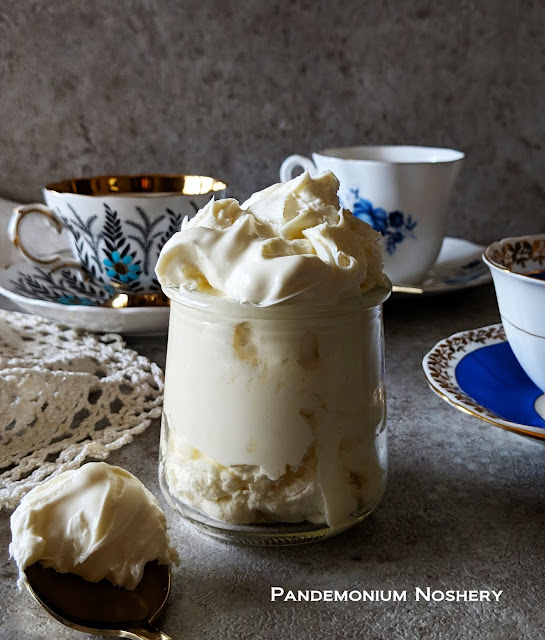 I really like scones with clotted cream. That decadent, rich, spread that tastes like fresh cream with the wonderful thickness somewhere between butter and whipped cream. But those little tiny jars I can only get when I go out of state, plus they are usually $7-9 for those little tiny bottles. So after tackling scones a few months ago I figured now it was time to try and tackle the clotted cream itself.

After watching a lot of youtube videos on the topic I realized it's actually really simple to make. Heat the cream, let it cool down slowly, and then chill. That's the basics of it anyway. The other big thing is that you can't use ultra-pasturized cream or it won't clot properly. So I looked and hunted at every grocery store in town and everything said ultra-pasturized. SO I went to my local farmers market to see if there was anything local and was directed to a farm in town that sells the most amazing heavy cream. It was so thick it was spreadable already. I have no idea the fat content of this cream but I'm guessing well over 80%.

So that right there gave me pause. If it was already so thick would it need to cook as long as the suggested 12 hours every seemed to prescribe? The answer is no, it wouldn't but I didn't listen to myself and heated it that long anyway. By the time it chilled it was solid even at room temp. So, for science, I went back and got more. And this round I cooked it for less than half the time.

The first batch of cream had very little liquid to strain off. Quite a few of the videos had a lot to remove but with a really high fat content I think it had a lower water content and there was none to separate out. I drained off barely more than a tablespoon. The second batch with cream from the same farm had absolutely none.

The top forms a crust as it bakes. This is totally normal. The color to watch for depends on the thickness of your cream. A thinner cream that needs to bake longer you should expect a darker, thicker, crust. A really thick cream such as what I was working with only had a very thin, light in color, crust. The pan that got a bit darker I knew had gone too far.

Pre-heat the oven to 175. Pour the cream in to the baking dish and leave in the oven.

Adjust the time to add more if your cream is somewhere between the two in texture. Leave in the oven for the required amount of time. Turn the oven off and leave the cream in there. Allow to cool for as long as you cooked it for. Chill for 8 hours to allow it to further set up.

Remove from fridge, gently scrape the crackly part off the top with a spoon. Scrape the clotted cream in to a glass jar or covered container and enjoy!
Labels: England Spice Mixes and Condiments Vegetarian