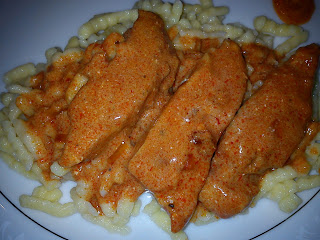 This is another blog cross over recipe with the picture and the recipe. It's a dish a created when we were still on college as a cheap meal that was different than our regular weeknight stuff. I used the same thing in this recipe I was told by a Hungarian lady years ago on goulash. She came to talk to my Girl Scout troop for our international festival and made us some. She said never use tomatoes or bell peppers in goulash. Other dishes yes, but never goulash. I have wondered over the years if this was a regional preference, since after looking around other swear by them.

I've also made this with great results by changing the end of the recipe. The paprika definatly needs to be cook in to the butter with the chicken or else it tastes dusty. But instead of removing the chicken and adding flour and broth pour heavy whipping cream over the chicken and simmer until thick. Either way it will taste awesome.  Just make sure your paprika is bright red.  I store it in the fridge and that helps it stay vibrant. Once it starts to turn brown, chuck it.
4 Tbsp unsalted butter
1 onion, coarsely chopped
1/4 c. paprika
2 lb. boneless skinless chicken breast, sliced
Salt & Pepper
3 Tbsp flour
2 c. warm water
2 chicken bouillon cubes
3/4 c. sour cream

Melt the butter in a large frying pan. add the onion and cook until the onion is translucent. Sprinkle with most of the paprika. Add the chicken strips. Sprinkle with salt, pepper and remaining paprika. Cook thoroughly on both sides. Cut one in half to check for doneness. Remove to a plate and keep warm.

When the chicken is removed whisk in the flour. Cook over medium heat for 2 minutes. Slowly whisk in chicken broth (or water and bouillon cubes) Simmer until bubbly. Stir the sour cream until it is smooth then stir into the hot sauce. Whisk to combine. Simmer for 3 minutes more to incorporate the sour cream. Add the chicken back to the pan, stir, and then simmer 2 - 3 minutes again.

Serve over spatzle or pasta