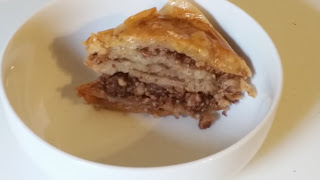 Growing up I had a friend that was Greek, some of my earliest memories of eating something new and adventurous are there at the festival eating the loukoumades. Those are my first association with Greek desserts. Baklava though is the more iconic I came to learn. My daughter, also sharing my interest, did a research project on foods. Her discovery, and what I could take told her from my edible research was this; Greek desserts typically involve honey and spiced. Nuts frequently too.
The loukoumades? Covered in a honey syrup.
Melomakarona? Baked with spiced and soaked in honey.
Diples? Drizzled with honey and tossed with spiced nuts.

So it's no surprise that baklava is sticky with honey, surrounding spiced nuts. Lots of them. Sandwiched between flaky layers of phyllo dough brushed with butter. I had always though the sticky stuff was straight honey.My brother lived in Bulgaria for two years (which means he can translate that cookie recipe I found on pinterest!) and he mentioned they make it there with sugar syrup instead. That appealed to me since I am very picky about honey, I don't generally like the after taste of wildflower or clover honey. Basically the types you can buy affordably in large quantities. Most recipe on google are a mix of the two anyway.

For this tasty creating I made the sugar syrup with honey in it. I used half Savannah Bee Company winter white honey (that and acacia tie as my favorite) and half golden syrup. I discovered golden syrup the other day and I love it. It's golden and it tastes a bit like toffee. It would be great with all golden syrup honestly. Either way, don't skip or your baklava will be dry and not hold together. 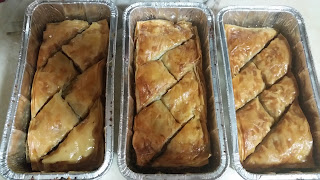