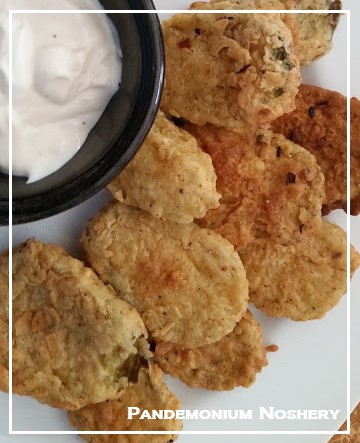 So I've been living in the south for a fair bit of my life now. I was born in the South, moved west as a teen, and moved back here, though more to the deep south, as an adult. While I don't exactly consider myself a southerner I pretty familiar with the culture. There are lots of things that make this area of the world different than any other. One thing they seem to be particularly fond of is breading and frying things. And I mean anything, candy bars, Oreos, cheese, green tomatoes, or in this case pickles. In the case of the green tomatoes I found out what really makes them is what you serve them with. I love them, but not on their own.  Some of my favorite additions to them have been goat cheese and corn chow chow, arugula pesto and pimento cheese, and bacon tomato jam. They get pretty creative with them. Fried pickles are the opposite though. Those you bread a little and dip in ranch and call it good. I suppose that is because unlike green tomatoes, pickles have a very distinct taste on their own. They don't need much to be dressed up. This also means that making them at home is fairly simple. The first time I had them I was out with friends and someone else ordered them before I got there. I was starving so I tried one since it was something before then I had assumed I wouldn't like. It turns out I was wrong, though I still maintain that I won't like the fried Twix. So I wanted to try making them at home.

The flour mix is simple and from there it's a pretty standard breading. Mix milk and eggs in one dish and flour with season all in another. Put the pickles on a paper towel to dry slightly and then dip in the egg mix and then the flour. I double coated them before frying. That's really all there was to it. I should add though that when eating pickles out of the jar I prefer the sweeter bread and butter pickles but to fry dill is the way to go. I tried both, though dill is generally what you will encounter when you order them. The sweet just doesn't work as well here. I also don't like an over powering ranch taste, it clashes with and/or over powers the pickle. So I mixed equal parts sour cream, mayo, and hidden valley ranch.