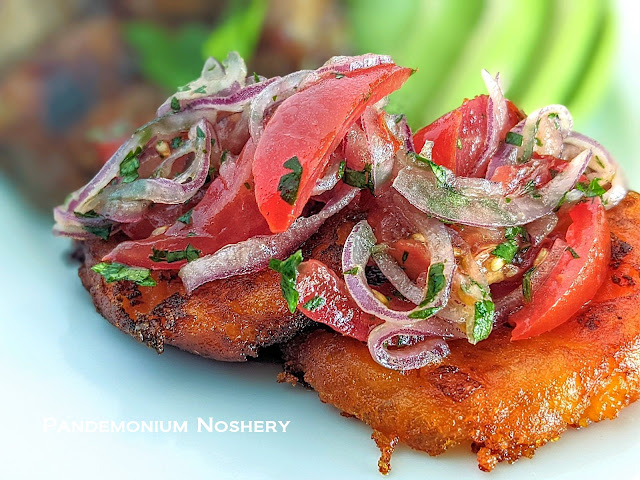 This week I am featuring a series of Ecuadorian recipes. I got to try food from a country I had not cooked from up until then and the food was wonderful, I'm so glad I got to experience a little part of that. I've said to before, but I seriously love exploring new countries through food.

This week I have a few new recipes to share with you, I hope you enjoyed them as much as I did and I hope it inspires you to try something new.  This particular recipe, the first in the series, is called llapingachos, pronounced "lap-en-gah-chose", and features potatoes and onions, and then wrapped around cheese, and fried to perfection. Top it all off with curtido, and tomato and onion-based salad that cuts through some of the richness and is delightful with the potatoes. 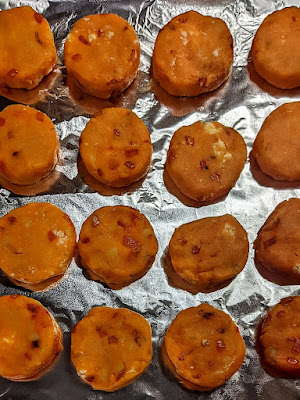 Ecuadorian Stuffed Potato Recipe
3-4 lb. baking potatoes, peeled and cubed
3 T. oil
2 large onions, chopped
3 packets Sazon Goya with achiote
1 c. queso panela
More oil for frying
Bring a large pot of salted water to a boil. Add the potatoes and simmer until tender. Remove from the pan and place in a large bowl.
While the potatoes are cooking heat the oil in a large pan. Add the onions and cook, over medium heat, until the onions are caramelized. This will require infrequent stirring. Do not allow the onions to burn. Once the onions are jammy and golden remove the pan from the heat and add the Sazon packets. Stir to combine.
Once the potatoes are cooked and removed allow them to cool some, without covering, to allow some of the moisture to escape. Add the onions and mash until no chunks remain. Taste for salt and adjust as needed. Allow the mixture to cook completely.
Take a golf ball-sized piece of the potato mixture and place it in your hand. Use your fingers to push the mixture to the sides forming a cup. Fill the potato cup with crumbled queso panel and squish to seal shut, sealing the cheese inside the potato. Form the potato into a disk. Set aside to allow it to set.
Heat enough oil to fry in. Add the potatoes and fry on each side. Remove from the pan and place on a rack to drain. Serve warm, topped with curtido.
Labels: Central/ South American Ecuador Group Blogging Challenge Kosher-Dairy Vegetarian