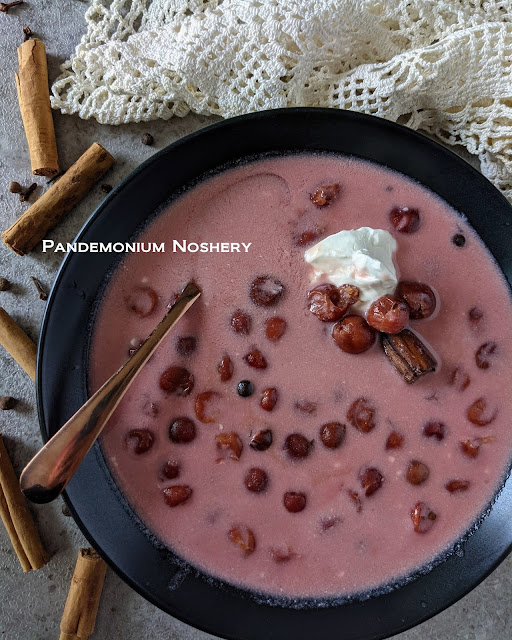 Hungary is country know for some distinct and delicious dishes. Meggyleves is a fruit soup with sour cherries, sour cream, and spices. The soup is a summer soup and traditionally served cold. It's made when fresh cherries are in season. There was some debate as to weather frozen sour cherries were and acceptable substitute, I went with camp "yes" mostly because I was intrigued and frozen was all I could find. We found it was delicious chilled, but it was also quite good when it was warm too. Despite being a summer soup the abundance of spices made it a delicious Christmas time treat as well.
2 (12 oz.) bags sour cherries
5 c. water
1/2 c. sugar
2 cinnamon sticks
8 allspice berries
5 cloves
pinch salt
2 Tbsp. flour or cornstarch
3/4 c. sour cream
Simmer together the cherries, water, sugar, cinnamon sticks, allspice, cloves, and salt. Simmer for 15 minutes.
Combine the flour and just enough water to make a thin paste without lumps. Whisk the flour mixture in to the cherry liquid and keep simmering until slightly thickened, it wont be much.
Stir the sour cream until it's smooth. Add some of the hot liquid, about a quarter cup, in to the sour cream and stir to combine. Add more of the hot liquid to the sour cream and stir a second time. Add the sour cream mixture to the cherries and stir to combine.
Allow to sit for 15 minutes. Stir again and then pour in to an airtight container. Chill until cold,
Serve cold with a dollop of sour cream.
Labels: Gluten Free Hungary Soup/Stew Vegetarian