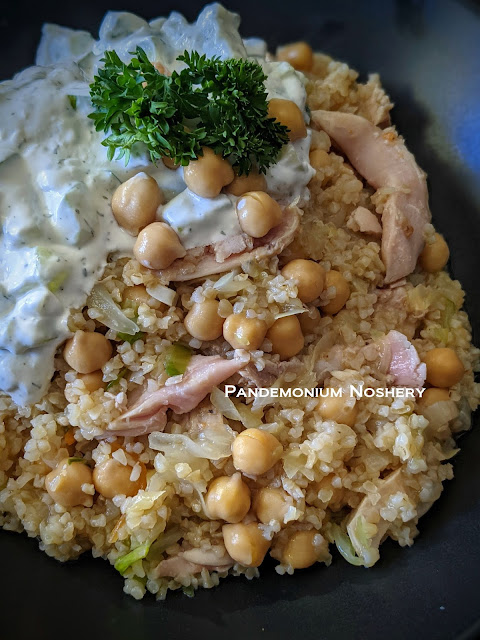 This Armenian dish come by way of a friend. She said her mother made it all the time growing up. It wasn't her favorite dish, in fact she didn't really like it much at all. Her mother said it was "Princess Pilaf" and it was what all the Armenian Princesses ate. The trick worked and now it is one of her favorite dishes.
My friend makes it completely meatless with vegetable broth and garbanzo beans but chicken is commonly added to the dish. I had a roast chicken for dinner one night, later I simmered down the frame to make stock. This makes the meat super easy to get off the bone and I was able to get a little over two more cups of meat to use up. Seriously, look at all the meat leftover after feeding six people. I did use the chicken broth made with it in the recipe and then used vegetable bouillon to season it instead of salt. The flavor is different and adds a nice touch to the dish. But really, use whatever you have on hand.
Jajukh salad is a cucumber and yogurt based salad that is extremely popular in eastern Europe, the middle east, and western Asian. There are variations, and this one includes lots of garlic, thick yogurt, and crunchy cucumbers. Use Persian cucumbers if you can, they don't' have as high a water content and the flavor and crunch is like no other. 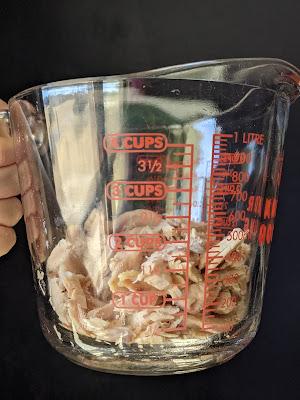 1 onion, chopped
3 Tbsp. olive oil
1/2 cabbage, sliced
1 carrot, grated
1 c. bulgar
4 c. vegetable broth
1 can garbanzo beans, drained
Leftover chicken (optional)
Salt and pepper to taste
Jajukh salad(recipe to follow)
Heat the olive oil in a large skillet. Add the onion and saute until tender. Add the cabbage and carrot and continue cooking until the start to breakdown and look cooked but isn't completely tender.
Add the bulgar, garbanzo beans, and broth. Bring to a simmer and cover. Simmer for 15 - 20 minutes or until the bulgar is tender and most of the liquid is absorbed.
Remove from the heat and add the chicken, if using. Taste for salt and pepper. Serve with jajukh salad on top or on the side and enjoy.
Jajukh Salad
1 c. greek yogurt
1 Tbsp. garlic paste
2 c. chopped  Persian cucumbers
1/2 tsp. fresh lemon juice
1/4 tsp. dill (fresh or dried)
Salt to taste
Stir all to combine. Taste for salt and adjust as needed.
Labels: Armenia