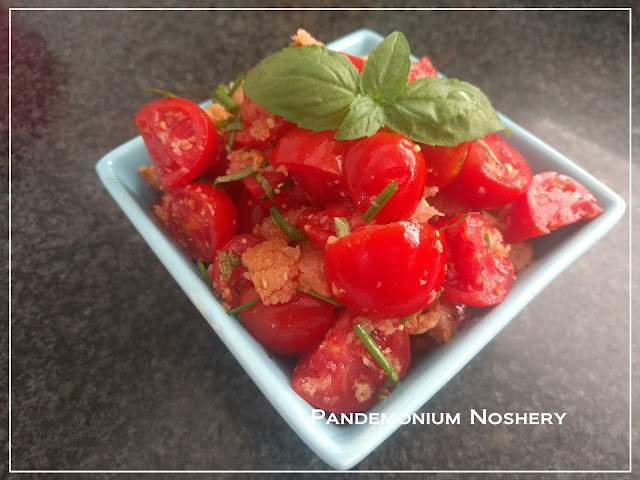 Middle daughter said this reminds her of bruschetta. While I can see that, I liked it even better. The tangy dressing with it rounded out the flavors perfectly. And it was really simple to make.

Make sure the tomatoes have a lot of good flavor on their own and don't skip the salting step. For the bread, sandwich bread really isn't ideal here. Something less dense is good. And I just happen to prefer the nutty flavor of the whole wheat, oat, and seed bread but an all white bread is good too.

Slice the cherry tomatoes in half and salt lightly. Place them in a colander over an bowl to collect the liquid. Leave for at LEAST 20 minutes, 30 is better.

Dry the bread out in the oven, I had a roast in my for dinner later and the bread was a few days old anyway though not totally dry. I was cooking the roast at 350 so that's what the bread got, I think it only took about 10 minutes to be dry. Remove from the oven and cut in to cubes.