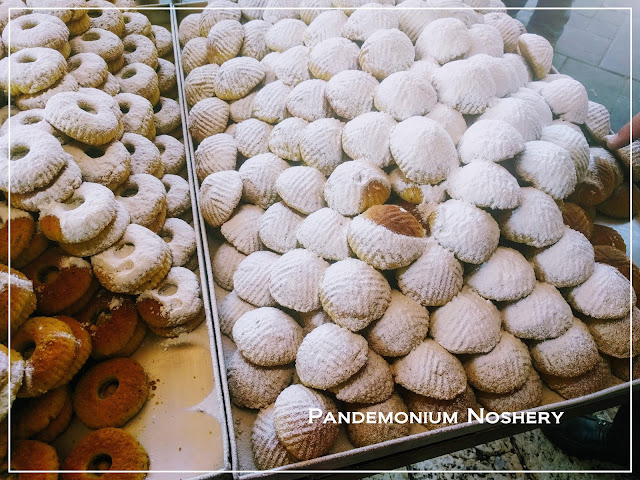 This is one of those happy accidents. I went to take a tour in an area of Jerusalem I'm not familiar with and the bus route from there took me through another unfamiliar area of town. As we were walking and enjoying the new sights around us I spotted a guy with a huge tray of pastries that looked interesting. So having absolutely zero idea what they were, other than covered in sugar, I went to buy some. I mean, covered like that in powdered sugar you can't go wrong, right?

So I told him I wanted "arba" or four and he looked at me like I was nuts. So I said "four?" and held up four fingers in case my accent on the Hebrew was what was causing the trouble. He asked me, still a little surprised, "four kilos?" I laughed and said "no, just four". He said "Ok" put four in a bag and we went on our way.

I handed the kids theirs and then took a bite of mine. And it was then that I knew I had made a mistake, a terrible mistake, one that days later as I am writing this I'm still annoyed with. I should have bought the four kilos. I could have eaten every single one of them myself. They are my new favorite cookie.

I had to ask online what they were even called, but thankfully someone in Facebook Land knew what they were. Ma'amoul in most areas, but kombe in Turkey kahk in Egypt.

As for the cookies themselves I suspect the filling had sugar but the outside had little to none, it's sweetness came from the sugar on top. It was a crumbly cookie with an almost nutty shortbread like flavor from farina. The filling was a soft, almost paste of dates with spices. Cinnamon I suspect and a distinct anise after taste with a walnut tucked on the inside.

If you ever see them for sale don't make the same mistake I did. Buy them by the kilo.
Labels: Egypt Jordan Lebanon Middle Eastern Palestinian Syria Turkey Vegetarian