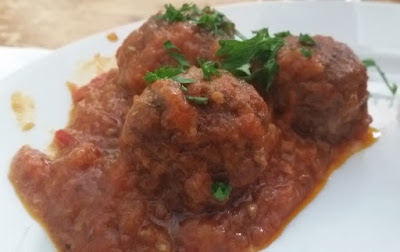 This is the 100th Pandemonium post. And I was had been trying to think of something fun to do for that, and then I forgot when I got excited about studying a new country. Which in itself is pretty fitting.

Someone found a flamenco demo and got a bee in her bonnet to study Spain. Lots of great kids activities later we have also been checking out Spanish food for dinner. So this recipe is the first of several to come. My youngest loved these, he had 18 for dinner. I loved them too, the flavor with the cumin and coriander and eggplant in the sauce was very different than the usual Italian with just tomatoes.

Start the sauce first, it give it time to really simmer and get delicious. Make sure and stir it often though or it will burn and stick to the bottom. Trust me on this one. Heat the olive oil and add the onion and cook for a couple minutes. Before it's done add the eggplant and sauce that too until it starts to break down and turn brown. Add the red pepper. Check frequently that there is plenty of oil in the pan. The eggplant tends to absorb it. Add the garlic and stir it again. Lots of stirring. Cut the tomatoes in half lengthwise and grate the center in. Stir everything else in and simmer for about 10 minutes. Using and immersion blender to break up the big chunks. A regular blender will work but be careful not to puree it until it's completely smooth. Simmer over low, stirring often for 40 minutes.

Meanwhile, combine everything for the meatballs and form in to balls. Super technical.

Eat with cute little forks and crusty bread to sop up the sauce.

Edited 6/29/2017 - This is now the 98th post, I deleted two previous posts because I hadn't ever been happy with them.
Labels: Spain