A few months ago I hosted a Chinese New Year party. As I was looking for things to fill the red envelopes with besides money, I settled on candy. I found some good things to stuff them with but one of the varieties of Chinese candy I ran across while researching was Crispy Candy.  I couldn't find any locally and Amazon wanted way too much for them so I didn't use them for that. But i've been on the look out for them ever since. They might not have made it to my event but I wanted to try them myself. Yesterday the really cool Asian market in Charleston had them.

They came in five flavors, the texture being pretty similar to a butterfinger, but not as hard. More flaky. The peanut butter one was my favorite followed by the black sesame and the coconut. The nutemeat one was ok, but sort of lacking in flavor. The last one was marzipan flavored, and I'm not a huge marzipan fan so to one wasn't a favorite. 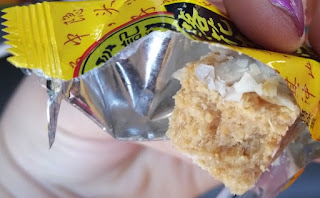 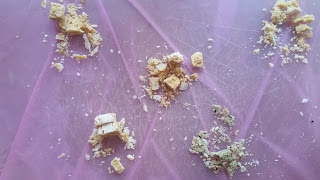