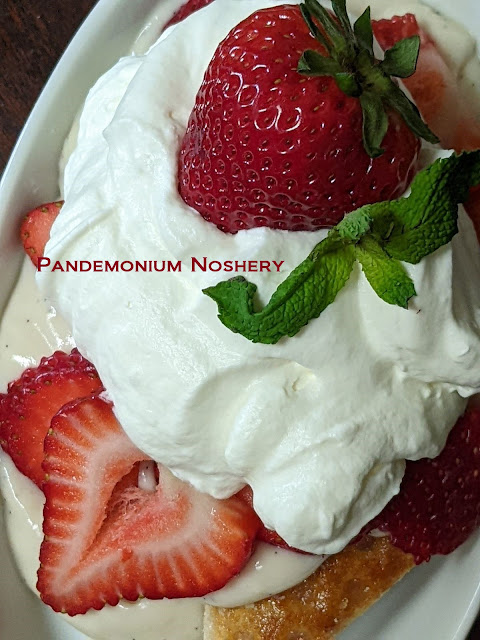 Greetings!! I am so excited to get to share this Oklahoma classic with you. Every spring Oklahoma City holds the Festival of the Arts. It's a great time full of music, delicious food, an abundance of jaw-dropping local artists, and just a general atmosphere of spring and warm weather. One of the staple dishes of the Festival of the Arts is Strawberries Newport. If you aren't from Oklahoma you might not have heard about it. Like most things in Oklahoma, it isn't well known outside of the state, but if you are a local then you know this is the thing to eat in the spring.

So what is it? It's puff pastry, topped with a vanilla pudding flavored with almond. Then there are layers of fresh berries and all of that is topped with freshly whipped cream. The one thing about this that really stands out, and makes it its own dish, is the pudding layer. I'm pretty sure the official version uses a pudding mix. In mine, I went with a rich egg custard and some high-quality almond extract, but just a touch, it's an accent flavor; you don't want it to overpower the rest of the flavors. 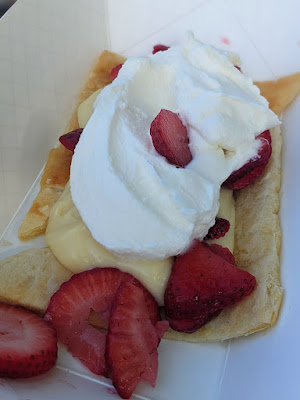 This is the dish I bought at the festival

One other aspect I wanted to highlight in this post is the various ways of stabilizing freshly whipped cream to keep it around for a while and not worry about it wilting. It's such a pain because it's so unstable, this makes it hard to use to decorate pies, or just keep on hand. So there are quite a few versions that are making their way around the internet so I'm going to try a few of them.

Some of the criteria I'm looking for are ease of method, taste and texture, and longevity. I plan on making a control batch and then trying 7 other methods and checking them at intervals to see how well they kept up.  I'm kind of curious to try some of them. Two I use all the time, one I've used in the past and haven't been happy with, and three were totally new to me.

One method I left out was the cream cheese method. This one is tedious and easy to mess up your whipped cream with. It also works because most cream cheese contains xanthan gum, that's what actually stabilizes the final product. Since xanthan gum is one of the methods I tried, and it's easier to work with, I included that one instead of cream cheese.

Types of Stabalaizers Used
So I looked into a few additional stabilization methods I hear a lot about. I used that same container of cream for all the test batches. I whipped them up and then cleaned out the bowl and the beaters so no previous stabilizers were lingering in the bowl. My kitchen was at 70 for the first several hours of tests and it did increase to 74 after 4 hours in the kitchen. I tasted all the creams as they came out of the bowl to see how the additional ingredients changed the. After they were whipped I checked the creams at 30 minutes, 1 hour, 2.5 hours, 4 hours, 10 hours, and 24 hours. I noted the differences in texture as they went along.
Initially, there were only slight variations in the taste. Most did not negatively affect the final product. The only one I really didn't like was cornstarch because it made it slightly chalky, but it was really subtle. The one I was most surprised with was the powdered milk; I normally don't like powdered milk cause it tastes weird but it added a nice bit of extra creaminess I will use in my whipped creams in the future.
At the 30-minute mark there really wasn't much change. None of the whipped creams really changed much in that amount of time.  At the 1-hour mark there really wasn't much change then either.
Things started to change at the 2.5-hour mark. The Karo had started to weep. The others were all still usable but the control was showing signs it was about to weep and was deflated slightly. The powdered sugar and the powdered milk stabilized ones were also sagging but still usable.
At the 4-hour mark there was finally some things happening. The Karo was really weeping and I'm safe saying it's not a stabilization method, in fact it was worse than the control with nothing. The Control, powdered milk, and gelatin were slightly deflated but no worse than at the 2 hour mark. It should also be noted that the cornstard version was no longer chalky.
At the 12-hour mark the control, the karo, and the cornstarch, and the sugar were a mess. Granted, they were sitting gout on my kitchen table that whole time. The cornstarch was less so than the others, but still not holding. The powdered milk was flatter, no weeping of any kind but not the same as when we started.
The 24-hour mark the results were pretty much the same as the 12-hour mark, just more pronounced. The four the held up pretty much stayed and the four that didn't more even more of a mess. I'm comfortable stating that xanthan gum, pudding mix, and gelatin are all methods that will stabilize your whipped cream.
At 24 hours I needed the counter space back and the whipped cream got tossed. I would like to note that I regularly refrigerate the pudding and xanthan gum methods and they will hold for over a week. More than that and they do start to separate. They also stay fluffy enough that they can be pipped onto thingsseveral days after being whipped.
Method: Control
Would use again: No
Notes: Nope, while whipped cream holds pretty well on it's on for a bit I'm always gonna add a pinch of something to guarantee it doesn't weep.
Method: Cornstarch
Would use again: No
Notes: This one held pretty well, and since cornstarch is a pantrys staple I do think it's a great one. However it was chalky at first. It did go away after a few hours but you have to wait for it to be good.
Method: Powdered Milk
Would use again: Yes and No
Notes: As a stabalizer I didn't love it. Taste wise though it was fantastic. I will be using both powdered milk and xanthan in the future, but only for flavor.
Method: Xanthan Gum
Would use again: Yes
Notes: This is my favorite method. It's simple and requires minimal extra work. Once the cream is about halfway whipped and starting to thicken add just a pinch, really, no more than a pinch to your cream and continue whipping until done. I've left this one in an airtight container in the fridge before and it stays stable and useable for weeks. Just make sure you don't add more than a pinch, if you add too much it will change the texture.
Method: Pudding
Would use again: Yes
Notes: I only use white chocolate pudding mix, it has the most neitral flavor. I used 1/2 tsp. of pudding mix per cup of cream, you really don't need a lot, any more than that and it changes the texture significantly and it's more like mouse than whipped cream. It's delicious, but a totally different dessert. I don't recommend vanilla pudding mix, it tastes to me like artificial vanilla and, well, pudding. It also has food dyes added and will leave you whipped cream yellowish
Method: Powered Sugar
Would use again: No
Notes: It worked moderalty well, but I don't like the flavor it adds to the final product and it doesn't hold up as long as some of the other methods.
Method: Gelatin
Would use again: No
Notes: This one was a bit more work. You have to bloom the gelatin, the cook, then cool, and then you can whip the cream. It works, but there are way simpler methods.
Method: Karo Syrup
Would use again: No
Notes: This method added a little bit of flavor to the whipped cream. Id did taste slightly different but not in a bad way, it was suble and the flavors went well together. 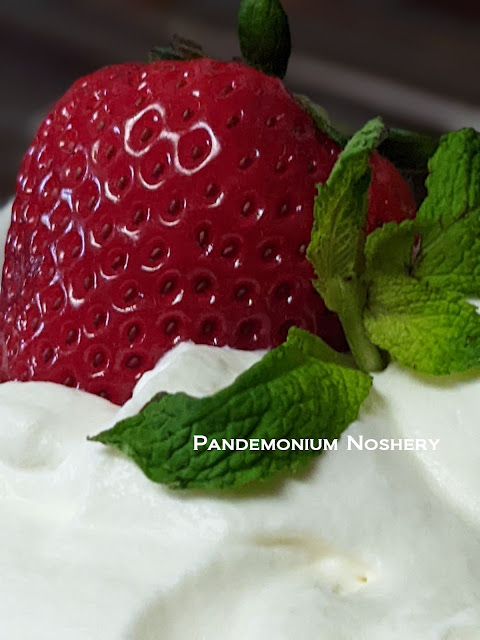 Strawberries Newport Recipe
Custard Recipe
3 c. Milk
1 c. Heavy cream
1 c. Sugar
2 eggs
1/3 c. Cornstarch
Pinch salt
1 Tbsp. Vanilla paste
1/4-1/2 tsp. Good quality Almond extract
Heat the milk and cream until it's just simmering.
Meanwhile, whisk together the sugar and cornstarch and then add the eggs and salt and whisk until it's a thick paste. Keep whisking for quite a while until it's smooth.
Slowly whisk the hot milk mixture into the egg mixture, stirring constantly. Once you've added about half of the milk to the egg add it all back to the pan and return to the stove on medium heat. Add the vanilla paste. Cook, stirring constantly, for 15 to 20 minutes or until it's thick and coats the back of a spoon. Remove from the heat, add the almond extract, and stir for another 3 or 4 minutes. Stir every 10 minutes for the next hour until it cools completely.
Also needed
2 lb. Fresh strawberries, sliced
4 c. whipped cream, see notes
2 pkg. puff pastry
To assemble
Layer puff pastry, then custard, then sliced berries, and top it all with whipped cream. 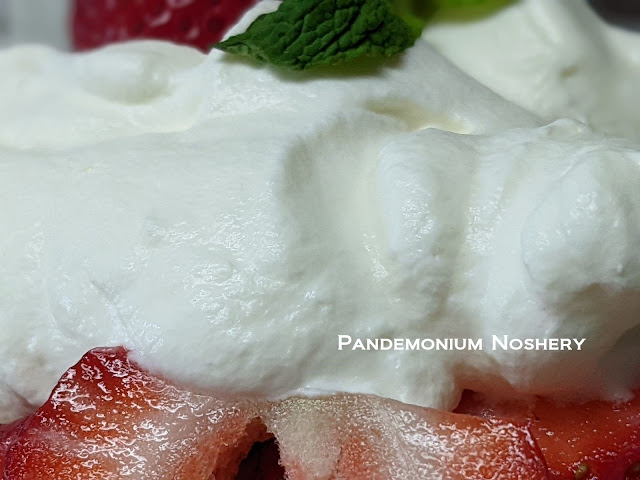