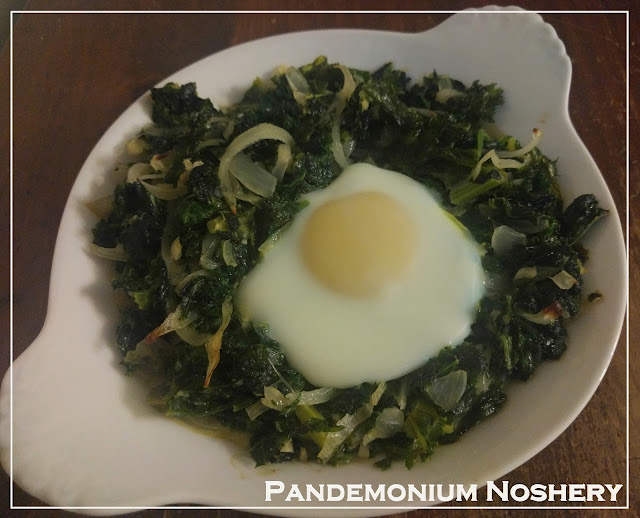 I've been absent from here for quite a while now, around the same time I was absent last year, and for the same reason. One of the first things I did when I got back to the states was to check out the thrift shops for anything good. And I found something, I really cute set of little white dishes. for $2! Six of them! So now they are mine. After what felt like forever but really was just a matter of weeks I was finally to my new home and able to cook again.

The first thing I made in my new dishes was a simple looking Persian recipe called nargesi. I used the greens I had in my fridge. Spinach of course, but also a bit of kale and swiss chard.

Heat the oil in a large pan and add the onion. Cook over medium heat until starting to take on some color. Add the garlic, some salt and pepper and a pinch or two of turmeric. Cook until the garlic smells delicious and then add the greens.

Cook, stirring, until the spinach is starting to wilt. Keep a close eye on it and keep cooking a minute or two longer. Divide between four individual serving dishes and crack an egg on top. This can also be cooked in the skillet it was cooked in, crack all four eggs on top.

Cover the pan or pans and take until the egg is just set. Remove from the oven and enjoy.